On April 28th 2022, Naval Group inaugurated the MCM Lab and the Cyber Lab, two collaborative R&D laboratories created within its subsidiary Naval Group Belgium. The Labs bring together Belgian institutional, industrial and academic partners to develop tomorrow's innovations in the field of mine countermeasures and cyber security.

Olivier de la Bourdonnaye, EVP Programs at Naval Group, said: "The inauguration of the MCM Lab and the Cyber Lab illustrates another side of our ambition to establish a long-term presence in Belgium in order to meet Belgium's essential security interests. The institutional, industrial and academic partners federated around the two Labs are working together to develop new strategic capabilities to serve Belgian sovereignty and to prepare together the future of mine countermeasures and cybersecurity in the maritime and naval domains.”

Eric Papin, EVP Chief Technical and Innovation Officer at Naval Group explained that "Naval Group has chosen to locate these Labs within its Belgian subsidiary in order to capitalise on the rich industrial and academic ecosystem in the naval field and more particularly in the mine countermeasures field. These two Labs are the central point for Naval Group's R&D activities in this key area. Their work will increase the information superiority of Belgian and allied navies and meet their needs as closely as possible. They will provide a clear operational advantage in mine countermeasures missions in order to offer the best technologies to face current and future threats.”

The MCM Lab and Cyber Lab: two centres of excellences, partners of the Belgian Defence Technological and Industrial Base and of European research

The MCM Lab is one of the key components of the industrial cooperation plan associated with the Belgian-Dutch mine countermeasure replacement program (rMCM) awarded in 2019 to Belgium Naval & Robotics, the consortium made up of Naval Group and ECA Group. This consortium was chosen by the Belgian and Royal Netherlands navies to supply twelve mine countermeasures vessels and a toolbox composed of around 100 drones.

One of the main objectives of the MCM Lab is to reinforce the Belgian and European mine countermeasures ecosystem. Its ambition is to become the European reference centre for the research and development of technical solutions covering the different domains of mine warfare.

The Cyber Lab teams focus on the development of cybersecurity technologies for naval applications, in particular for ship and unmanned systems as well as for shore-based infrastructures. The work in progress involves, alongside Naval Group's cyber experts, Belgian and European partners such as NVISO. The Cyber Lab is a centre of excellence specialising in the implementation of cybersecurity measures developed for the benefit of the rMCM program. The Cyber Lab is also a key promoter of the development of technologies and solutions for the naval and maritime sectors in Europe. The future Belgian Cyber Command of Defence will follow this development in order to integrate the technologies where possible. 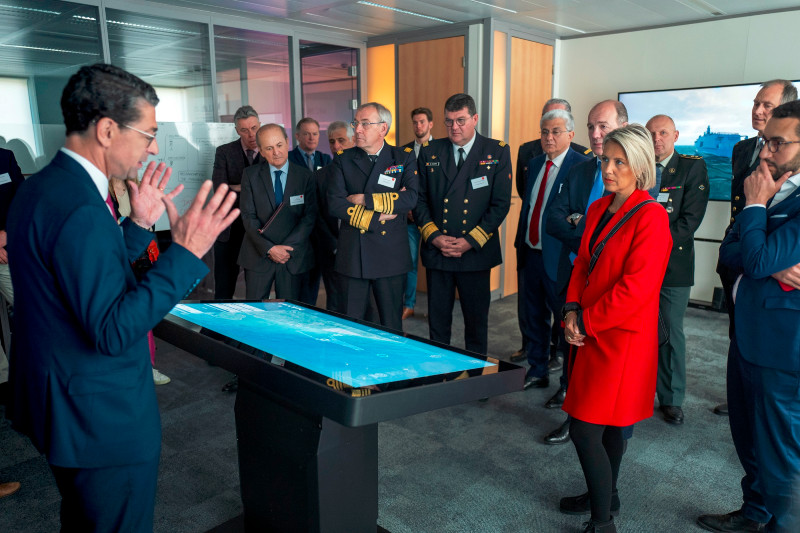 Naval Group Belgium is the 100% subsidiary of Naval Group based in Brussels. Intended to be the group's mine countermeasures centre of expertise, it hosts the MCM Lab and the Cyber Lab and carries the group’s R&D developments as well as the product line for mine countermeasures. Naval Group is a partner to its customers' maritime sovereignty. An international player in naval defence and heir to French naval know-how, Naval Group develops innovative solutions to meet the needs of navies. Present throughout the entire life cycle of the ships, the group designs, builds, integrates and maintains submarines and surface ships, as well as their systems and equipment, through to dismantling. It also provides services for shipyards and naval bases. A high-tech company, it builds on its exceptional expertise, its unique design and production resources and its ability to set up strategic partnerships and successful transfers of technology. Attentive to the challenges of corporate social responsibility, Naval Group is a member of the United Nations Global Compact. With operations on five continents, the group has a turnover of 4.1 billion euros and employs 16028 people (full-time equivalents / 2022 data).