Naval Group and the start-up Icarus Swarms, part of Dronisos, have signed a memorandum of understanding to develop drone swarm solutions for navies.

The fight against asymmetric warfare is one of the major concerns of 21st century navies.

Drone swarms or robot swarms represent both a threat and an opportunity for existing fleets. Drone swarms, whether airborne, surface or underwater, are resilient, saturating and elusive. They thus make it possible to carry out new forms of missions that are complementary to conventional vectors. Navy missions can therefore be impacted by these new technologies.

Dronisos, a French start-up, is one of the few companies in the world capable of simultaneously deploying five hundred to one thousand aerial drones that act in concert thanks to artificial intelligence. The start-up has been deploying its know-how for the past five years, in particular for large events and theme parks around the world. Dronisos now offers Icarus Swarms kits, mini swarms of drones dedicated to specific security missions: lighting, radio jamming, anti-drone system testing, radiological mapping or people or equipment research.

Naval Group, the European leader in naval defence, is therefore strengthening its research and development activities in the field of drones. The signing of this partnership is part of the company's innovation approach, which already brings together laboratories, start-ups, industrialists and navies around the theme of drone swarms

Co-shaping the future of drone swarms

To strengthen their collaboration, Naval Group and Icarus Swarms have formalized their partnership in a memorandum of understanding signed on February, the 1st, 2022.

The complementary expertise of Naval Group and Icarus Swarms in the field of drone swarms should lead to the emergence of tomorrow's uses.

This partnership has already led to regular trials, some of which are carried out in collaboration with the French Navy. Naval Group and Icarus Swarms have already carried out simulated attacks of ten to one hundred drones to test systems for detecting asymmetric threats using Dronisos' Certifence product.

In a prospective approach similar to the one of the Red Team1 , Naval Group imagines the use cases and new threats of tomorrow. These swarms of intelligent drones could, for example, be deployed underwater and in the air to protect the diving and surfacing of a submarine from detection.

These new applications will be developed and tested, in particular in New Aquitaine, at the Naval Group site in Angoulême-Ruelle as well as at the Dronisos offices in Bordeaux.

The Angoulême-Ruelle site specializes in the design, manufacture, testing and maintenance of a wide range of equipment for the surface and submarine vessels of its navy customers.

The Innov'Factory, Naval Group's 4700m2 building based in Ruelle sur Touvre, dedicated to innovation and development, will welcome the project team in the coming months to continue the exchanges and explore future joint developments. 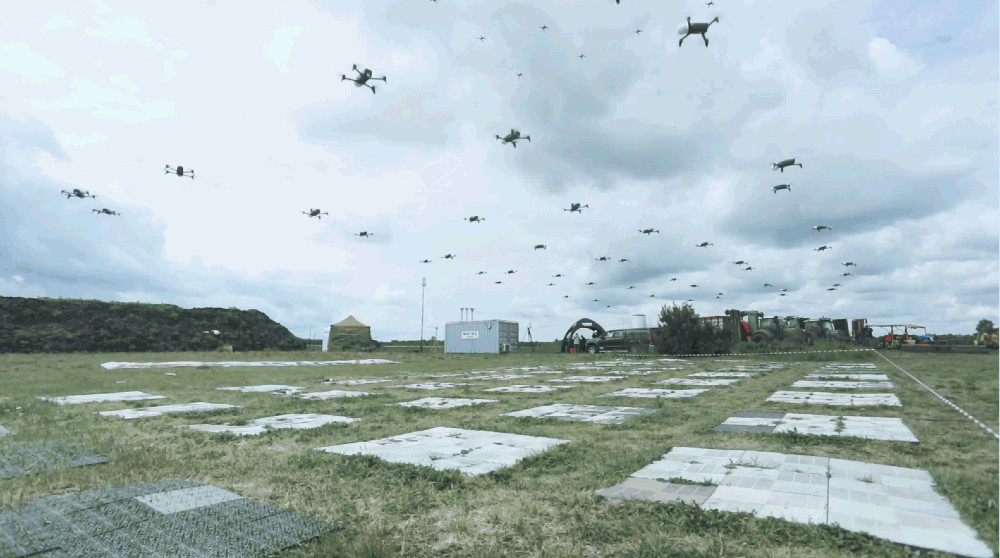 Pioneer among autonomous drone swarm developers, the Icarus Swarms team has over five years of experience in developing swarm flight systems.
It offers its expertise to easily and cost-effectively operate drone swarms for military, police and emergency response forces.
Icarus Swarms works with the French Army Special Forces, the RAID, Thales and Naval Group. It relies mainly on drones from the French manufacturer Parrot.

Naval Group is a partner to its customers' maritime sovereignty. An international player in naval defence and heir to French naval know-how, Naval Group develops innovative solutions to meet the needs of navies. Present throughout the entire life cycle of the ships, the group designs, builds, integrates and maintains submarines and surface ships, as well as their systems and equipment, through to dismantling. It also provides services for shipyards and naval bases. A high-tech company, it builds on its exceptional expertise, its unique design and production resources and its ability to set up strategic partnerships and successful transfers of technology. Attentive to the challenges of corporate social responsibility, Naval Group is a member of the United Nations Global Compact. With operations on five continents, the group has a turnover of 4.1 billion euros and employs 16028 people (full-time equivalents / 2022 data).