Just as Naval Group has contributed to France's and Europe's sovereignty, we help our clients maintain and develop their own. See how our solutions contribute to their economic, military, industrial, technical and energy independence.

Eighty percent of the sun’s solar energy is stored in the surface waters of the world’s oceans. OTEC taps into this renewable energy source by using the difference in temperature between the warm surface water and cold deep ocean water to generate electricity. It is a non-intermittent baseload energy source that can replace the fossil fuel plants used commonly on islands with no connection to the mainland electricity grid.

Offshore floating wind turbines allow the capture of wind energy at sea. It offers an innovative way of harnessing the energy potential of offshore maritime areas where the water is too deep for fixed wind turbines. France has the second largest potential in Europe, thanks to its Atlantic, English Channel and Mediterranean coastlines.

The Open-Centre tidal turbine developed by OpenHydro, a Naval Group company, is installed on the seabed at a depth that presents no danger to navigation. The lubricant-free, slow-moving rotor provides a clean, predictable and renewable energy while minimizing the risk to marine life.

France is one of the world’s five official nuclear powers. It maintains a policy of “strict sufficiency,” as outlined by President Chirac in 2000: “Our nuclear forces, reduced to a level of strict sufficiency, are the ultimate guarantee of the survival of our nation.” This position was reiterated in the French White Paper on Defense and National Security, published in 2013, which stated: “Nuclear deterrence is the ultimate guarantee of our sovereignty.” Since 1996, with the withdrawal of its ground-based missile force, the French nuclear deterrent comprises submarine-launched and air-launched components.

A partner from the start

Naval Group has played a key role in enabling the sea-based component. It built and designed France’s first nuclear ballistic missile submarine (SSBN), Le Redoutable. When it entered service in 1971, it was the result of an entire program encompassing the design and construction of an 8,000-ton nuclear-powered vessel. In the 1970s and 1980s, as construction of the Le Redoubtable-class SSBNs continued, Naval Group began work on the successor. Today, the sea-based leg of the French nuclear force consists of four Le Triomphant-class SSBNs, based at Ile Longue, Brittany, on the Atlantic coast. The last of the four, Le Terrible, entered service in September 2010.

These SSBNs are France’s largest submarines (it also has six nuclear attack submarines built by Naval Group). They provide unprecedented acoustic discretion, a high-performance combat system and an ultra-reliable propulsion system, thus ensuring their invulnerability and guaranteeing the permanence of their deterrence. At least one SSBN is always deployed.

More than just a fleet

Rather than just build boats from a catalog, Naval Group guarantees the complete operational command of France’s SSBN fleet. From design to dismantling, and naval base infrastructure to Through-Life Support, Naval Group offers control over every aspect of a submarine’s lifecycle. A perfect example is the current SSBN upgrade campaign.

Naval Group is currently in the process of upgrading three of its four Le Triomphant-class submarines with France’s newest M-51 submarine launched ballistic missiles (the fourth, Le Terrible, was equipped with the M-51 from the outset).

In 2015, the latest of the upgraded SSBNs left the Brest naval base operated by Naval Group, after a 30-month retrofit. In addition to a complete upkeep program and the reconfiguration to accommodate the new M51 ballistic missile, the navigation, communication and combat systems were also upgraded. During the boat’s period in dock, over 1,000 workers completed four million hours of work.

Naval Group cannot, of course, do the work alone. That is why it has developed and maintains an extensive industrial base and eco-system in France and aborad. Over 45 contractors, selected and managed by Naval Group, are part of the SSBN upgrade program.

Just as France’s nuclear deterrent has been developed to ensure its national sovereignty, the industrial infrastructure and eco-system that Naval Group has built enable France to maintain its industrial sovereignty. It is a model that exports well.

The contract between Naval Group and the Brazilian navy, signed in 2009, covers the design, production and technology transfer required for four Scorpène® -type conventional submarines, and the design assistance and production of the non-nuclear part of the first Brazilian nuclear powered submarine, including support for construction of a naval base and shipyard. In India, Naval Group and Mazagon Dock Shipbuilders Limited are building in India six Scorpène-class submarines. As part of this submarine program, Naval Group is helping the country develop its own indigenous submarine building industry. Both programs are helping these nations develop industrial and international sovereignty.

Making it in India

As part of the agreement and the country’s “Make in India” initiative, Naval Group has helped India “indigenize” an ultramodern manufacturing ecosystem for its defense sector. In the process, Naval Group has expanded its global supply chain by qualifying India suppliers for its future projects. Learn more about this win-win way of working. 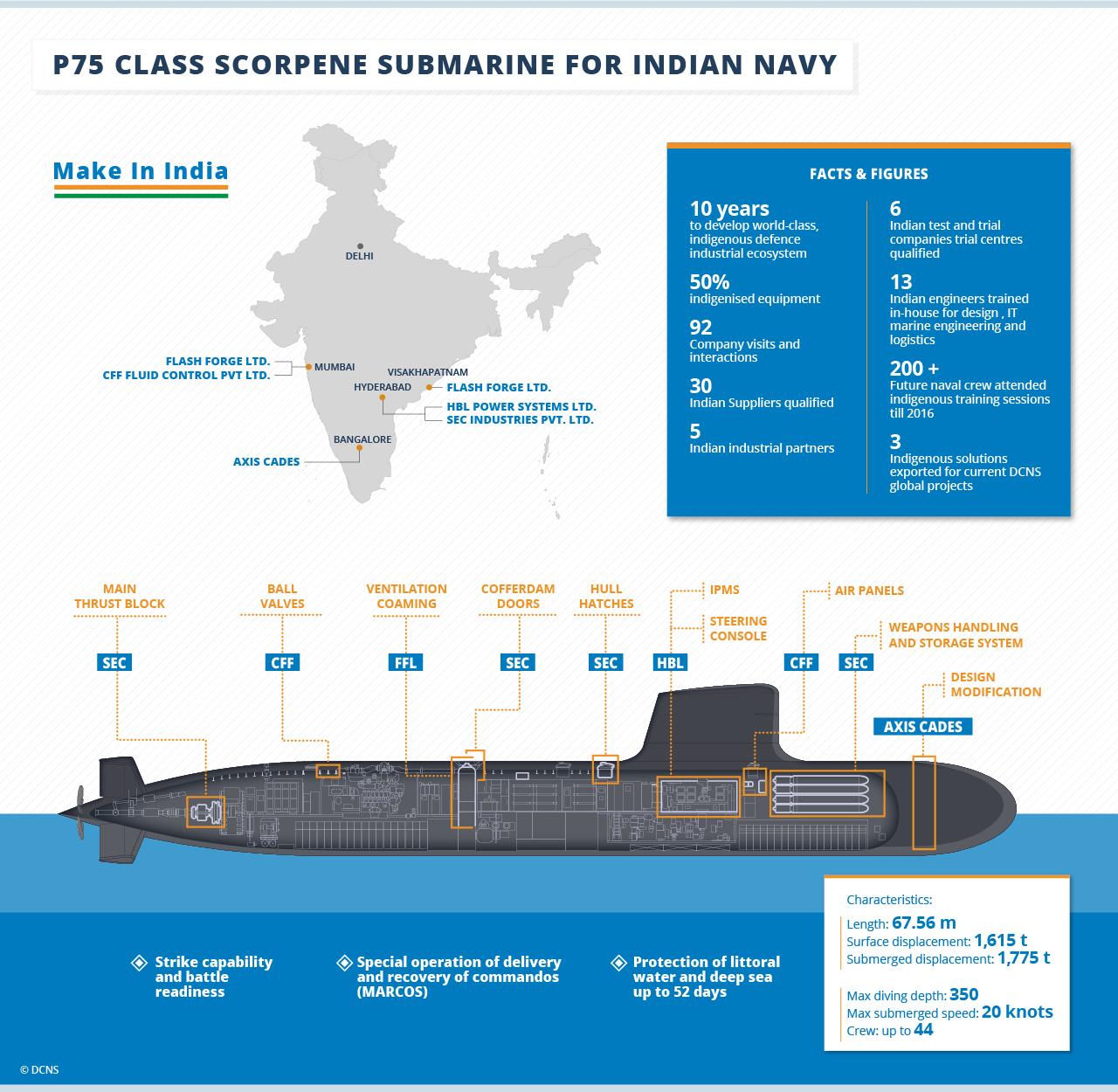 From zero to state of the art

As part of a joint venture with Odebrecht, Naval Group signed in 2009 the PROSUB contract in Brazil. The contract covers the design, construction and transfer of technology of four Scorpène® class submarines. They are being built by the Itaguaí Construções Navais (ICN) joint venture owned by Naval Group and local partner Odebrecht. The contract also includes support with the design and construction of a naval base and dockyard.

Fast forward to 2015. ICN needed to find a way to accelerate learning among its engineers and technicians. They couldn’t all be trained at Naval Group’s facilities in Cherbourg. Ticiana Sales Leon, program manager of ICN’s award-winning ICN Knowledge Management system explains what they did.

What was the challenge?

You cannot transfer technology without transferring the knowledge of the people behind the technology.

“But you cannot transfer technology without transferring the knowledge of the people behind the technology. For the project to be successful, we needed to train a lot of experts in a very short space of time.

We stated by training over 150 ICN engineers and technicians at Naval Group’s facilities in Cherbourg and Lorient in France, but it wasn’t enough. We needed to share the knowledge of these experts with the wider population of 13,000 employees at ICN. The conventional way of doing this would be to have them train people when they got home. But this takes them away from their work and is limited in how many people they can train at a time. It also doesn’t enable us to assess if people have really learned what they’ve been taught and doesn’t protect knowledge from being lost if an expert retires or moves to a new job.”

So what did you do?

“We decided to treat learning like a project and industrialize the transfer of knowledge. Instead of teaching courses on academic subjects, we identified what people needed to know to do their job. Then we identified what they would need to learn to acquire those competencies. We structured this into what we call Knowledge Paths and built digital, blended-learning modules that combine video and actual technical and project documentation. This enabled us to capture not only hard knowledge, i.e. book learning, but also soft knowledge, i.e. what the experts have learned over the years through their experience.”

Why did you win a prize?

In 2016, we were awarded the CrossKnowledge prize for Best Initiative in content creation for our blended-learning system.

“In 2016, we were awarded the CrossKnowledge prize for Best Initiative in content creation for our blended-learning system. It was the first time that a learning system was directly linked to the knowledge management system of an industrial project.”

What have been the results?

“People are learning 70% faster than with our previous learning methods. Our leadership is very engaged with the program; 85% of them have integrated the new learning system into their change management activities.

It makes people better at their job. For example, when we requalify technicians, we find that the ones who update their qualifications using the new learning system make 15% fewer mistakes. More importantly, our end customer, the Brazilian Navy and Brazilian Department of Defense, views the new learning system very positively, because they can see that not only is the technology being transferred but that Brazil is developing homegrown expertise in highly advanced subjects.”

“We continue to build on this success. Learning is now firmly part of the ICN culture. We have created 21 Knowledge Paths so far, with over 350 hours of training content. The number of users continues to grow steadily as has the average amount of time they spend learning. The satisfaction rate among learners is over 86%.”

The economy of Chile is growing fast and needs more energy. By many estimates, its extensive coastline, powerful waves and tidal currents could generate more than 10 times its current installed power generation capacity. This would help ensure the country’s energy security and avoid a future energy crisis.

There’s just one catch. Chile needs to acquire expertise in marine renewable energies fast. That is why Naval Group and Enel Green Power are helping to develop MERIC, Chile’s International Centre of Excellence in marine energy research and development. Take a moment to understand the country’s marine energy potential and the contribution of MERIC. 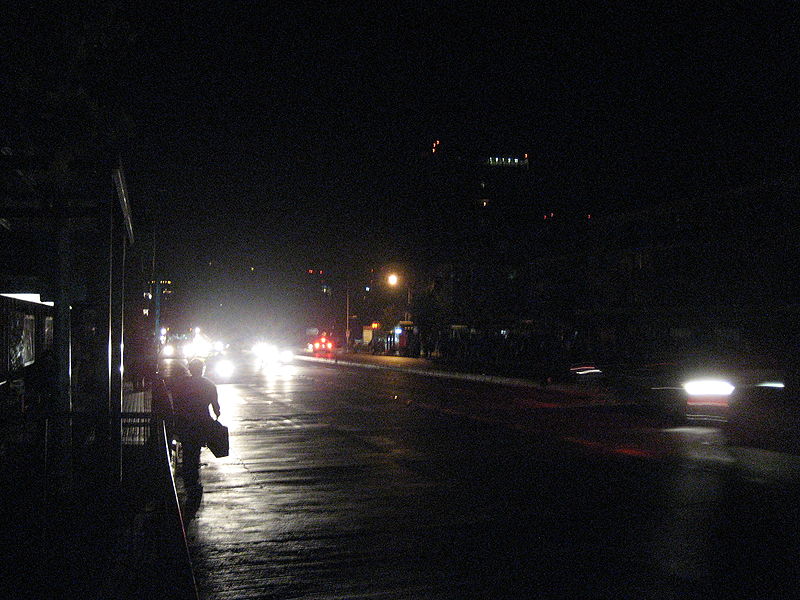 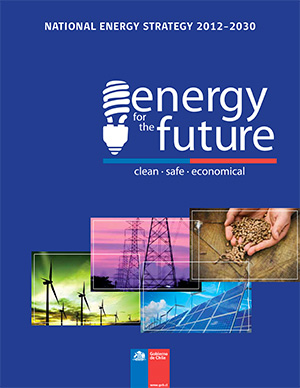 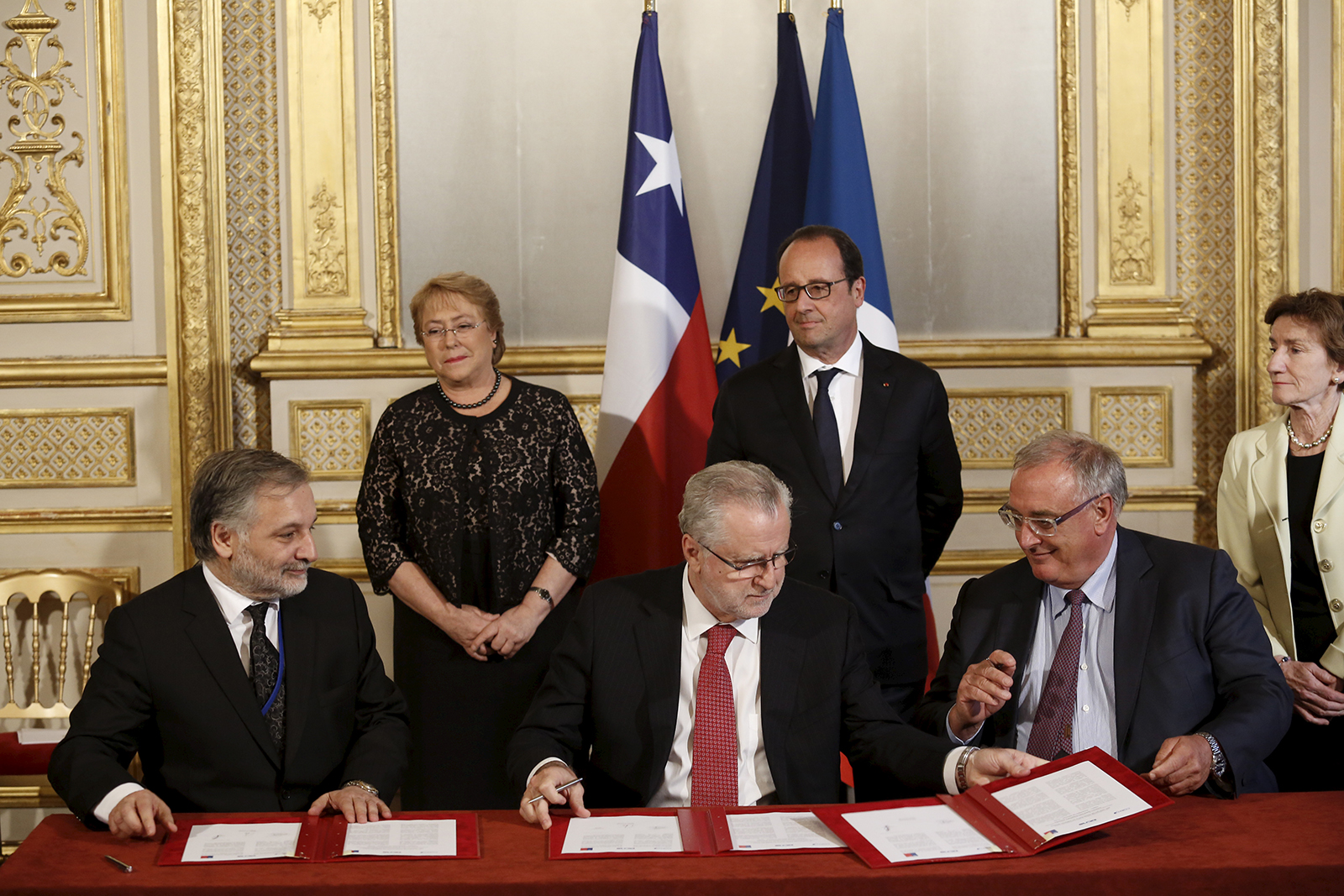 Target date for having 70% of Chile’s energy come from renewable energy sources. 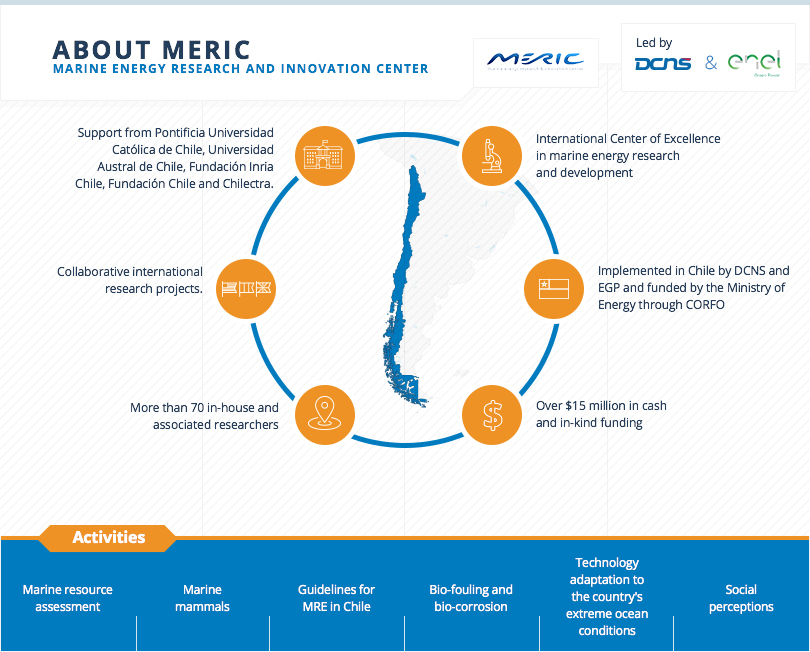