Can we provide crews with man-machine interfaces (MMI) for easier, safer and more efficient use of the Combat Management System (CMS)? The CMS is becoming more intelligent, but also more complex. Find out more about the SETIS Innovations prototype in the Ollioules showroom. We put our questions to Sébastien Rousset, Operations Innovation Project leader, and Martin Chenet, Project leader for the operations room of the future.

What is SETIS Innovation?

Sébastien Rousset: It’s an innovative R&D project financed by Naval Group. It aims to propose a man-machine interface for the CMS specifically for crews. It ensures user-friendly exploitation of the data from the increasingly complex combat system equipment: touch screen interfaces, 3D representations, decision-making assistance tools, etc. In short, it is a super interface, paired with a super brain, running on artificial intelligence.

What can visitors to the Ollioules showroom actually see?

Sébastien Rousset: Depending on the audience and visitors (government, general public, more technical operational personnel), we run one of two scenarios. The first starts with the system currently used on the corvette, then suddenly switches to SETIS Innovations. The transition illustrates Naval Group’s vision: how we aim to upgrade our Man-Machine Interfaces to manage the combat of the future.
Martin Chenet: Scenario 2 is aimed at more “operational” visitors. It presents an innovative integration of weapon systems (cannon, missiles) and drones. The cross-fertilisation between intuitive MMI and artificial intelligence is clearly demonstrated. It enables better understanding of operating rooms, which are themselves increasingly complex. We have already installed 2 SETIS Innovations consoles on the Charles de Gaulle aircraft carrier. Feedback from the crews will help us to make improvements and adjustments.

How do the various visitors react?

Sébastien Rousset and Martin Chenet: The showroom is an incredible tool for communication and even education, and people react quite differently. For the general public, the philosophy of a Man-Machine Interface paired with touch screens is “normal”. However, operational personnel recognise a technological breakthrough compared with existing CMSs. Most of them would love to have one immediately. They are aware of the constraints on board and also offer insight on certain details. Switching from one world to the other is another interesting aspect of our jobs. The showroom is a great tool for presenting what may well become standard on the ships of the future. However, we also explain during the demonstrations that marine warfare requires consideration of the various constraints before we can integrate these innovations.

A word to conclude?

Sébastien Rousset: The Ollioules showroom is a place for questions, challenges and visions of the future. The SETIS Innovations demonstrator will also be present in other showrooms eventually (Lorient, Cherbourg). In the meantime, we would like to invite anyone who is interested to come and see or share with us a disruptive idea… to do it! COVID has obliged us to film the scenarios so that they can be shown at digital exhibitions and in-house. 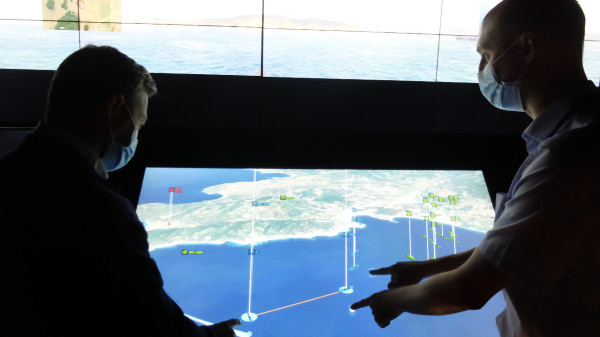