Naval Group welcomed the French Minister of the Armed forces for a visit of the shipyard hosting repair work on the nuclear attack submarine Perle.

Naval Group received the French Minister of the Armed Forces, Florence Parly and the French Chief of Navy, Admiral Pierre Vandier, at its Cherbourg site. They toured the shipyard where the nuclear attack submarine (SSN) Perle is currently being repaired. The Minister of the Armed Forces and Ambassador of Australia Gillian Bird also met with the Franco-Australian teams working on the Australian Future Submarine program.

«Naval Group and its industrial partners are fully committed to enable to allow the French Navy to recover as quickly as possible the potential of its six nuclear attack submarines. The success of the repair works on the Perle owes a lot to the know-how and professionalism of the Naval Group teams involved and we are proud to offer these unique skills at the service of a challenge whose scope we fully appreciate” declared  Pierre-Eric Pommellet, Naval Group Chairman and CEO

The Perle repair and transformation

The repair and transformation works on the SSN Perle that has been heavily damaged last June  is a totally new challenge. Five months after the beginning of the work, the undamaged back of the Perle  will be assembled with the bow of the Saphir. The latter was withdrawn from service in July 2019.

The hybridisation of two submarines is both an innovative and controlled operation. Different steps included:

Around 100, 000 hours of engineering studies are underway to update some 1,4 meter long area added to the submarine) and the splicing area of thecables and pipes that run through the submarine from bow to stern. An important layout work of the junction area has been carried out using a 3D digital model of the Perle, realised by a team of five design integrators. hey created a digital twin of the area, in which they defined the pipe and cable routes, the supports that will hold the pipes and cables, etc. This 3D model will also allow the electricians and pipe fitters to rehearse their movements in virtual reality before carrying out the operations on board.

Once refurbished, the SSN Perle will be stationed at the Toulon naval base. Naval Group will start afresh at the end of 2021 the Periodic Interruption for Maintenance and Repair (PIMR) and finally the upgrade of the submarine.

Since the French Minister of the Armed forced decided on October 22nd to proceed with the SSN Perle repair, all the milestones have been reached. The Perle was transported from Toulon to Cherbourg. She was positioned on the launching device at the beginning of January 2021 and the preparation works for the thick hull cutting have started with the decks, bulkheads and electrical cables cutting. The thick hull cutting was a sensitive step perfectly mastered.

The work site in figures

This large-scale project represents more than :

The nuclear attack submarine Perle is the last of six Rubis Class submarines, admitted to active service in 1993. Once renovated, she will be 1,4 meters longer, a volume specifically created to integrate the junctions box necessary for the splicing of electrical cables in particular. This extension will also provide two new living quarters, which will save space for the crews. 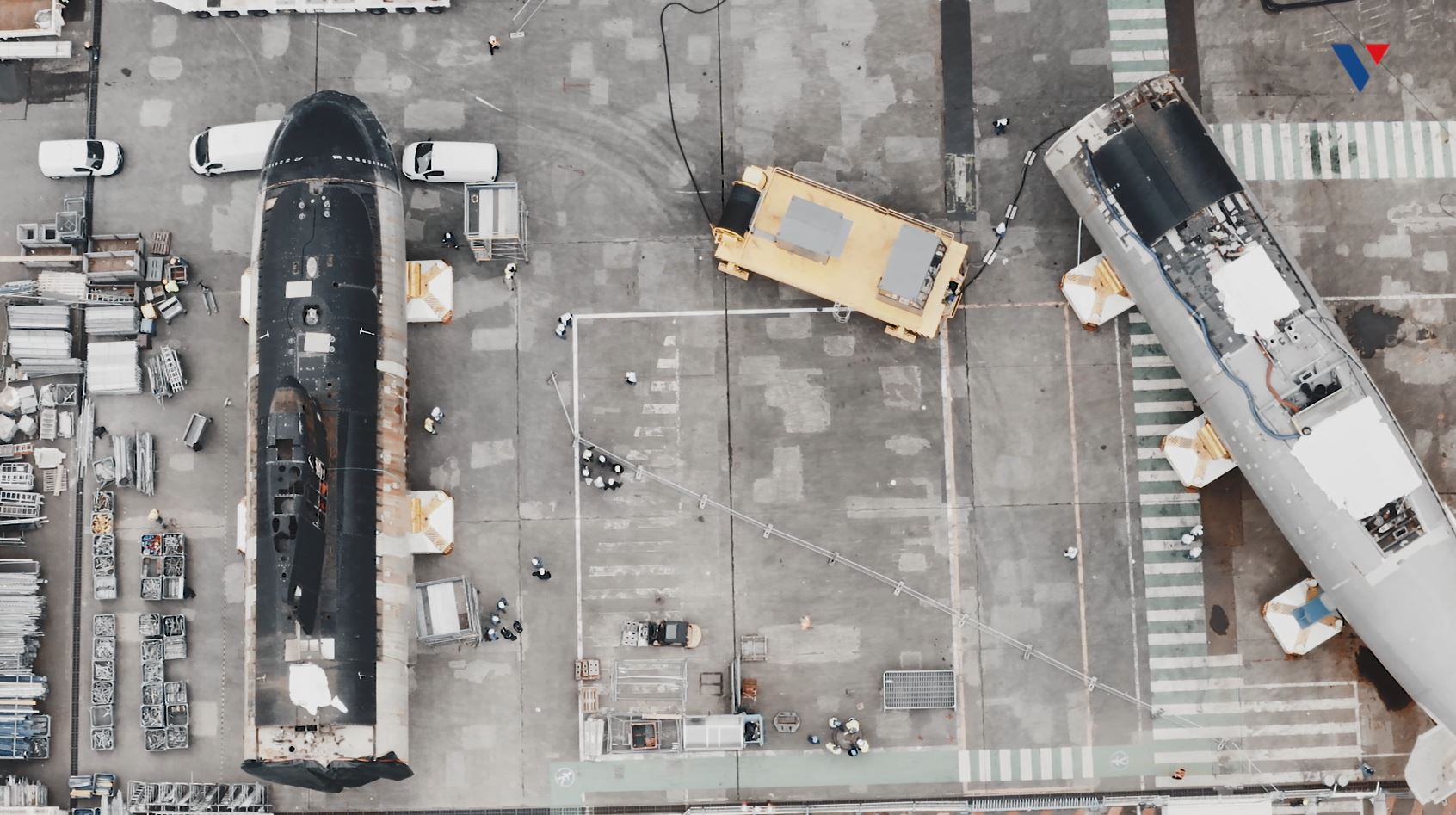