On 30 June 2022, at the French Embassy in Greece and in the presence of the Ambassador, His Excellency Patrick Maisonnave, Naval Group gathered its Hellenic industrial partners to sign key contracts and teaming agreements as part of its Hellenic Industrial Participation plan for the FDI frigates for the Hellenic Navy.

In this respect, 4 contracts were signed on 30 June with EMMIS for the supply of electrical transformators, with MEVACO for mechanical equipment, with STELMA for paint application work, and with VIKING NORSAFE HELLAS for the supply of rigid hull inflatable boats.

Alain Guillou, Naval Group Executive Vice-President Development said: “Today, we are celebrating a new milestone in our strategic partnership with Greece. I am convinced that this is only the beginning of our collaboration with our Hellenic industry partners. We are committed to supporting the Hellenic Navy in achieving regional superiority at sea, but also the ability of the Hellenic industry to actively prepare the future of naval warfare.”

David Quancard, Naval Group Executive Vice-President Operation and Performance added: “At Naval Group, we are convinced that partnership is a key and strategic driver for the success of the complex programs that we conduct. We are proud to be signing today contracts and teaming agreements with our Hellenic partners. As the procurement for the frigates is on track, we know that this program will be the first of many we will work on together.“

Patrick Maisonnave, french ambassador in Greece, declared: “I am very happy to see the first contracts come to fruition between French and Greek manufacturers following Greece's acquisition of Naval Group's FDI frigates, armed with MBDA missiles. These contracts give form to the vision of the Greek Prime Minister, Kyriakos Mitsotakis shared by the French President, Emmanuel Macron, for a strong partnership between our defence industries. This significant step will produce major benefits for the companies of our countries and for our Navies.”

Beyond their participation to the frigates program, all qualified Greek companies will integrate the Naval Group’s supply chain and have the possibility to participate to other future international competitions, thus increasing their capabilities as well as their potential economic benefit and visibility on the worldwide naval market.

Thanks to its long-term presence in Greece, Naval Group has been able to identify and build relationships with many high-skilled and innovative companies. As at today, more than 80 projects have been identified and the Group has started to engage with over 50 prequalified Hellenic companies.

Naval Group’s Hellenic Industrial Participation plan will thus contribute to the construction of the FDI HN but also to the creation of a robust naval industrial ecosystem. The structured and longterm partnership proposed by Naval Group will foster production in Greece but also the capability to address future needs. 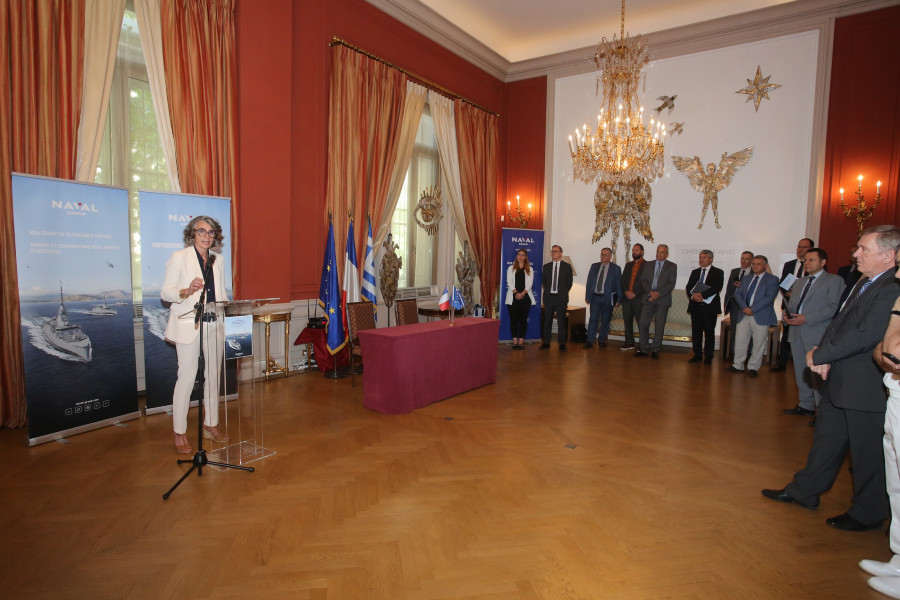 Naval Group is a partner to its customers' maritime sovereignty. An international player in naval defence and heir to French naval know-how, Naval Group develops innovative solutions to meet the needs of navies. Present throughout the entire life cycle of the ships, the group designs, builds, integrates and maintains submarines and surface ships, as well as their systems and equipment, through to dismantling. It also provides services for shipyards and naval bases. A high-tech company it builds on its exceptional expertise, its unique design and production resources and its ability to set up strategic partnerships and successful transfers of technology. With operations on five continents, the group has a turnover of 4.1 billion euros and employs 16028 people (full-time equivalents / December 2021 data).