Ever since Cardinal Richelieu signed the order to build the new naval shipyards that would become Naval Group, innovative thinking has been at the heart of the company. From the first ocean-going iron clad to the first European surface vessel equipped with cruise missiles, discover how we have used our unique spirit of innovation to revolutionize naval defense over the centuries and most recently to bring marine energy into the mainstream.

A boatload of expertise

The late 1800s saw the arrival of the first torpedo boats and military submarines. Naval Group’ experience in submarines dates back to this era, with the launch in 1863 of Le Plongeur, the world’s first motorized submarine. It was followed by Le Gymnote in 1886, one of the world's first diesel-electric submarines, and Le Narval in 1899, the world’s first operational torpedo-carrying submarine. Both were built in shipyards that are now part of Naval Group.

Fast forward to 2016. Naval Group is one of the few companies in the world to have design competencies in nuclear and conventional submarines, having safely delivered 37 submarines, ranging from 2,000 tonnes to 14,000 tonnes, in the past 50 years. Naval Group currently designs, builds and/or maintains Scorpène® 2000 submarines for Brazil, Malaysia, India and Chile. Naval Group is designing and building the new Barracuda SSN attack submarine for the French Navy, the first of which will enter service in 2017. Naval group is also responsible for France’s current fleet of Le Triomphant-class SSBN submarines.

Discover how Naval Group overcomes some of the deepest challenges of submarine design and construction.

Ever since it was invented, the submarine has been one of the most complex kinds of vessels ever built by humankind. The hull must withstand extreme external pressure. Weight and balance need to be precisely calculated. Crew and equipment must fit within a confined space. Depending on the role for which it is designed, the submarine must be able to operate at a wide range of depths, from shallow to deep waters, and meet a variety of requirements for stealth, shock resistance, electrical efficiency, weapons load, mission, maintenance, etc.

Compared to their nuclear-powered counterparts, conventional-propulsion submarines have historically been limited in their underwater endurance. Because their diesel engines need oxygen to operate, they switch over to battery power when fully submerged and must regularly surface to recharge. Naval Group offers a range of solutions to increase submerged autonomy. These range from lithium-ion batteries, which can increase underwater endurance of a Scorpène®-type submarine to seven days, to a second-generation, fuel-cell air-independent propulsion system (AIP) that stretches endurance to three weeks.

While stealth is a submarine’s main strength, its biggest weakness has always been situational awareness. That’s why Naval Group’ thinking about submarines has always looked beyond sonar and periscopes. It has developed solutions like the Vipère® multifunction buoy that enhances a submarine’s intelligence-gathering and communications capabilities without having to come up to periscope depth. Other solutions include unmanned underwater and air vehicles (UUVs and UAVs) that can roam far from the submarine’s location. 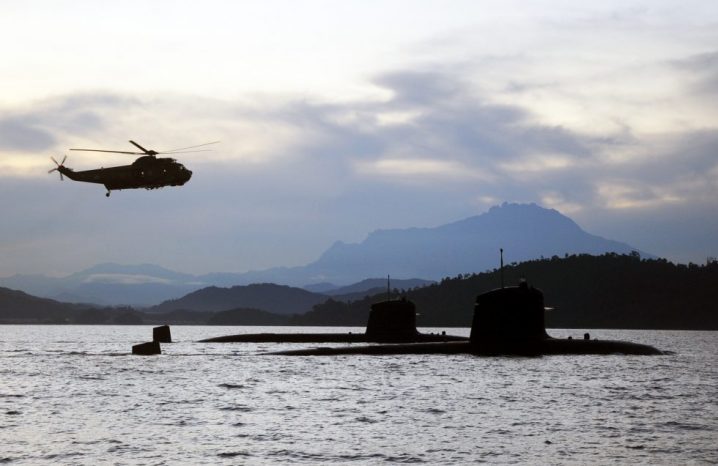 Whether used for attack or missile launches, submarines need a fully integrated combat system to gather information, build a comprehensive picture of the tactical situation and deploy weaponry. The combat system also needs to include a weapon handling and launching system. In addition to building submarines and SUBTICS®, a combat system that has been fitted in 42 submarines worldwide, Naval Group also designs and makes its own torpedoes, including the F21 heavyweight, dual-purpose torpedo used by the French Navy.

With its experience building nuclear deterrent and attack submarines, Naval Group has acquired extensive expertise in stealth design. Thanks to decades of R&D and real-world experience, it is able to reduce the acoustic signature of its submarines by mitigating mechanical and hydrodynamic noises. Advanced materials, propeller design, sound insulation, vibration reduction, AIP systems and optimized crew sizes also help increase the boat’s stealth.

Of missions and systems

The frigate that brought the Marquis de La Fayette to America in 1780 was a technological marvel of its time and the pride of the French fleet. Thanks to its copper-clad hull, the Hermione could sail faster than any ship that it could not outgun. Its design so impressed the English that they captured and reversed engineered her sister ship.

At the time, the Hermione was the jewel of the French Navy, built by the predecessors of Naval Group. Naval Group’ expertise in frigates continues to this day. The La Fayette-class frigate was the world’s first operational stealth warship, and the FREMM multi-mission frigate can execute a wide range of roles thanks to system integration and naval interoperability. Let’s set sail with the FREMM and see it in action. 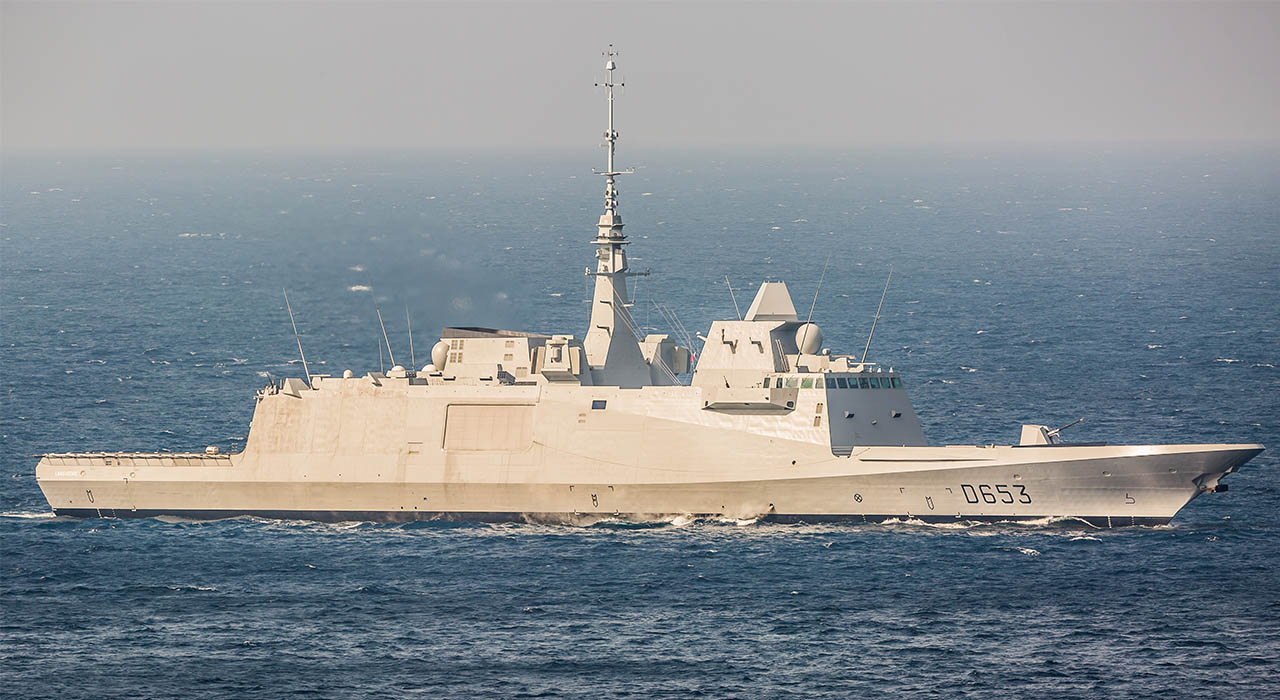 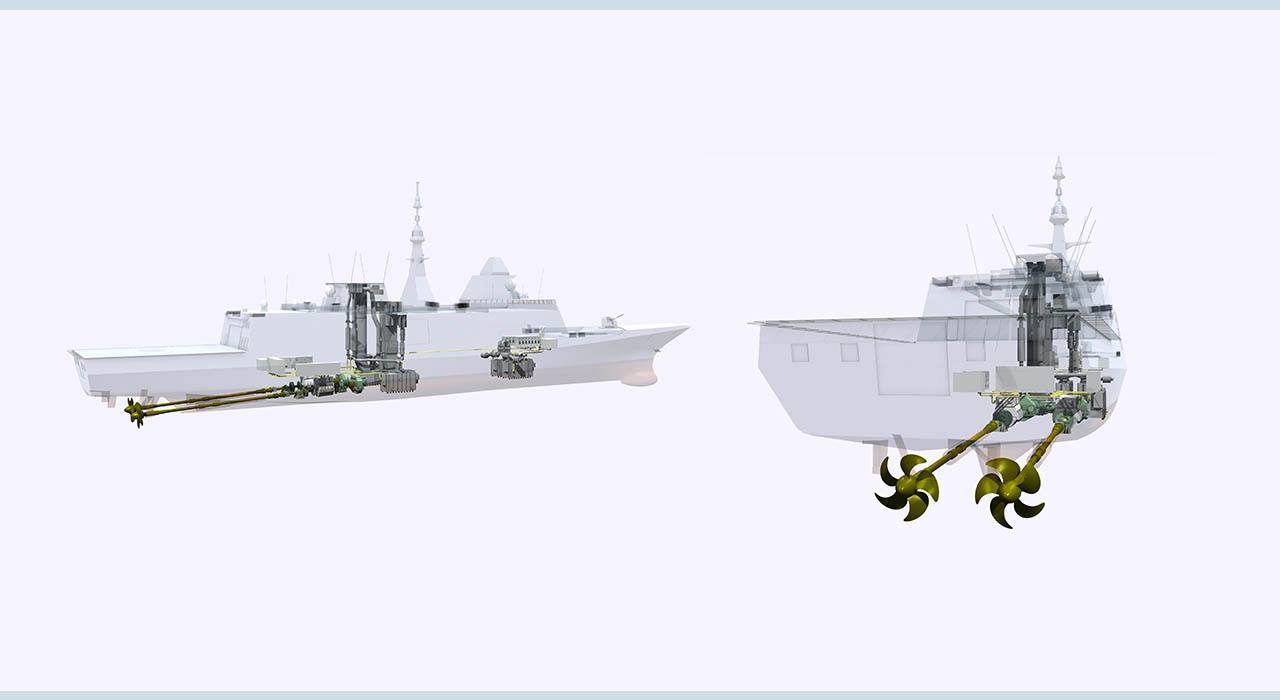 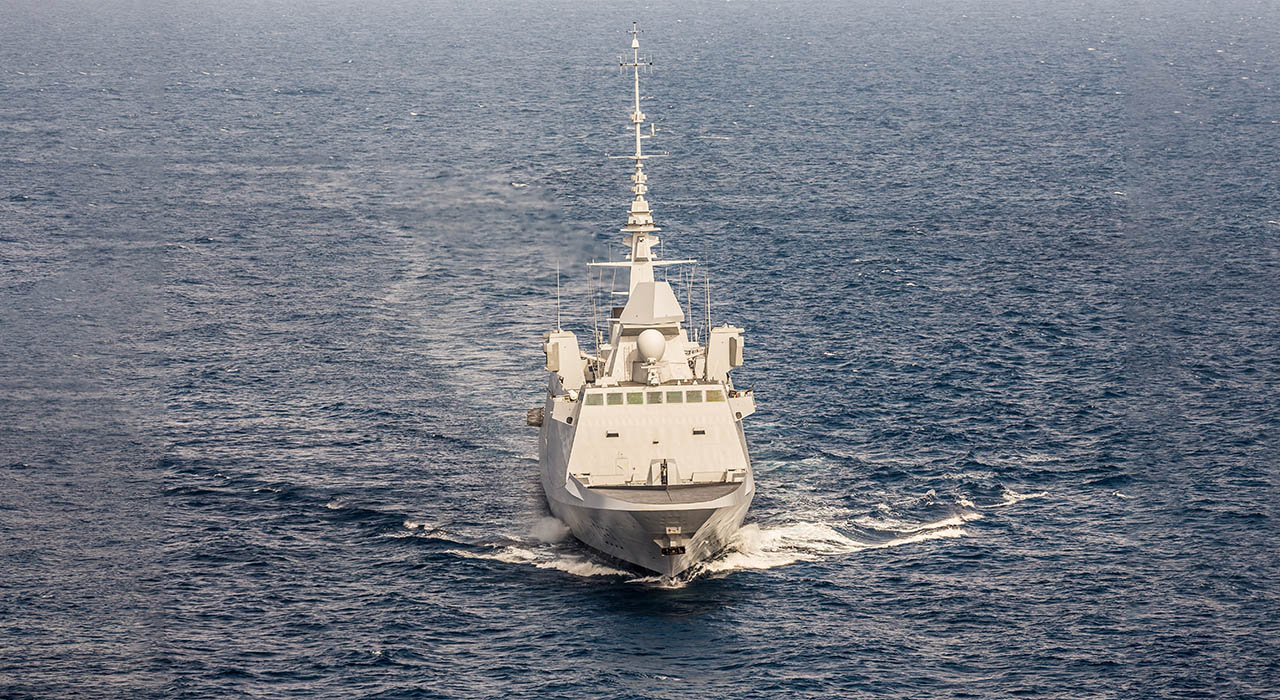 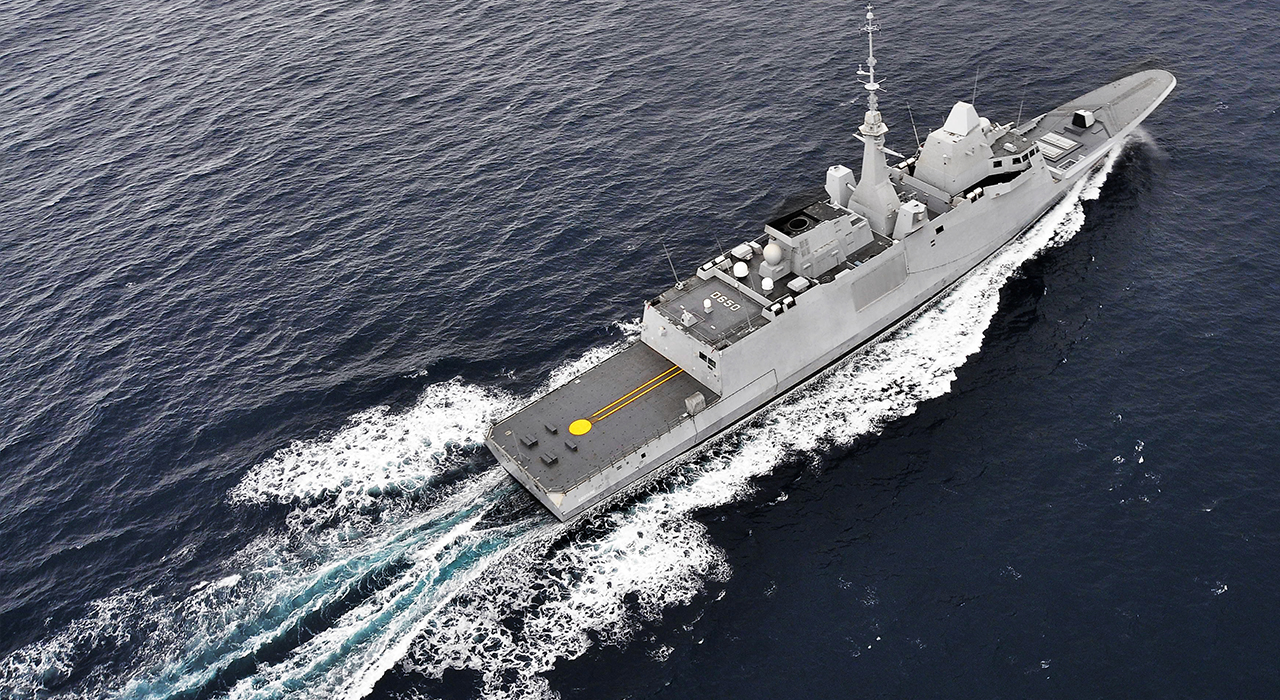 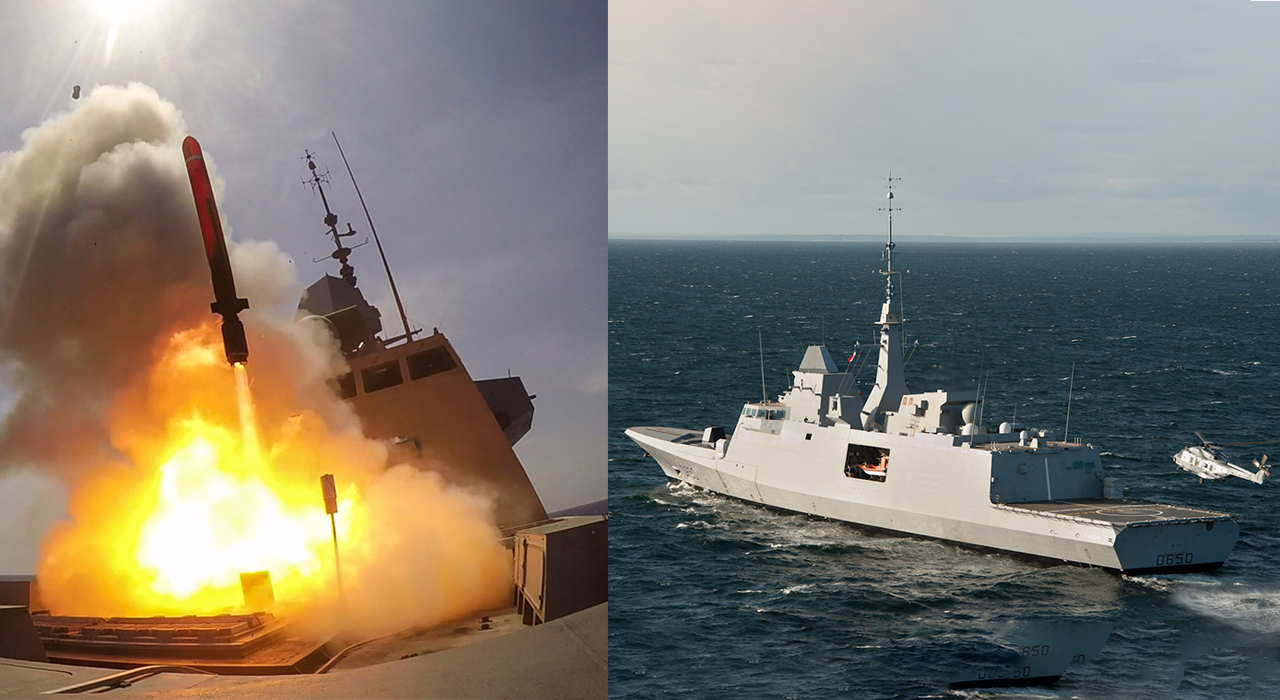 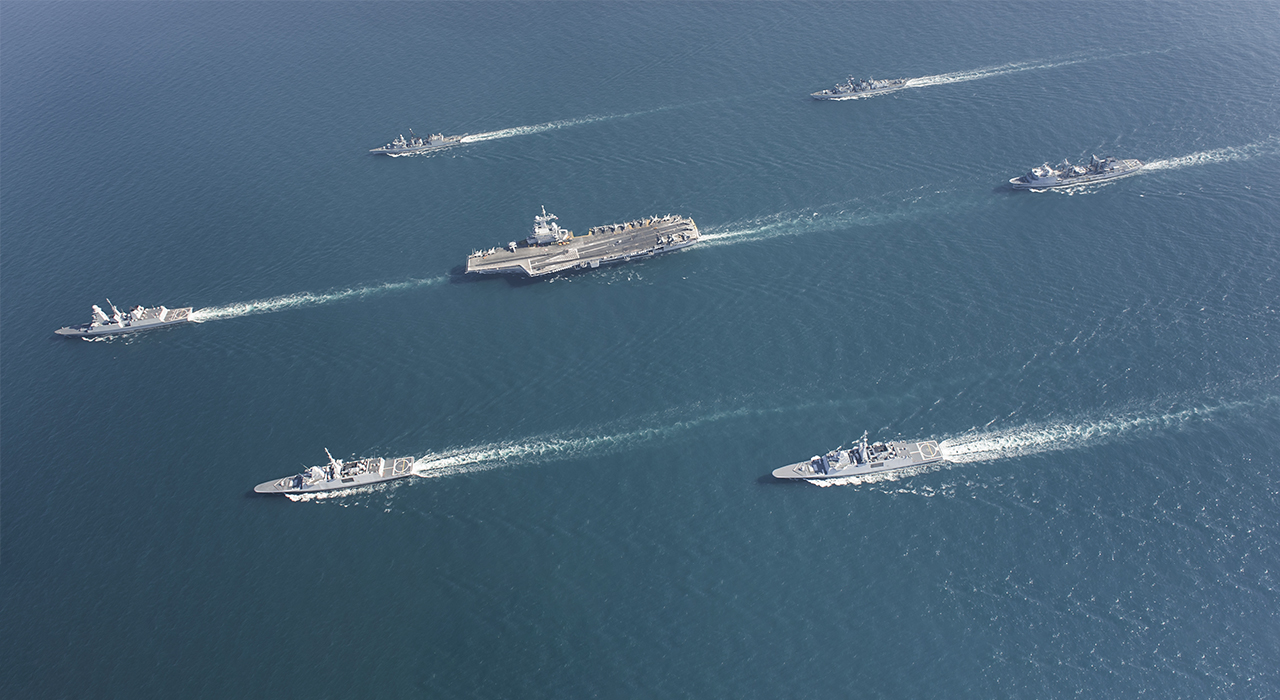 The Charles de Gaulle aircraft carrier was constructed by Naval Group and launched in 1994. To this day, it is the only nuclear-powered carrier built outside of the United States Navy. Naval Group also conducts all its maintenance, including major overhauls called Major Technical Shutdowns. The first MTS was done in 2007 and the next is scheduled for 2017.

Naval Group will have just 18 months to conduct Major Technical Shutdown No. 2. To help you understand the scale of the challenge that lies ahead, we let the numbers do the talking. They show why it is destined to remain the most sophisticated, highest performance warship ever built in Europe. 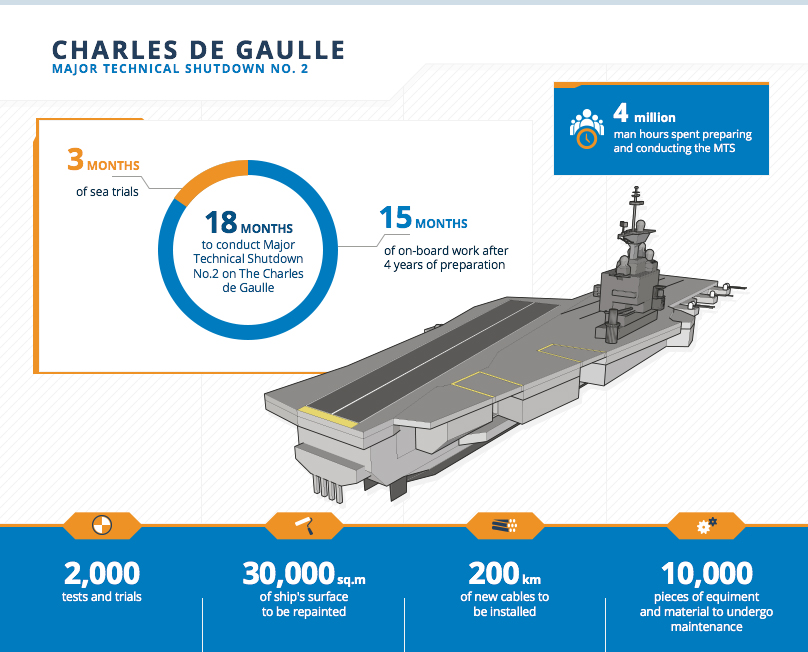 Shipbuilding under one roof

The Naval Group of today can trace its roots back to 1631, when France’s Louis XIII ordered the construction of new naval shipyards. More than just an administrative decision, this move was a radical change in naval shipbuilding. It aimed to bring together under one organization the best experts and infrastructure that France had to offer in terms of naval architecture, construction, systems integration, and maintenance.

Fast forward to today. We take you on a tour of Naval Group’s unique end-to-end industrial model, which has been exported with success around the world.

The design of submarines and surface vessels is done at our facilities in Brittany and Normandy. These locations are also home to R&D activities, material sciences research, and industrial process development. 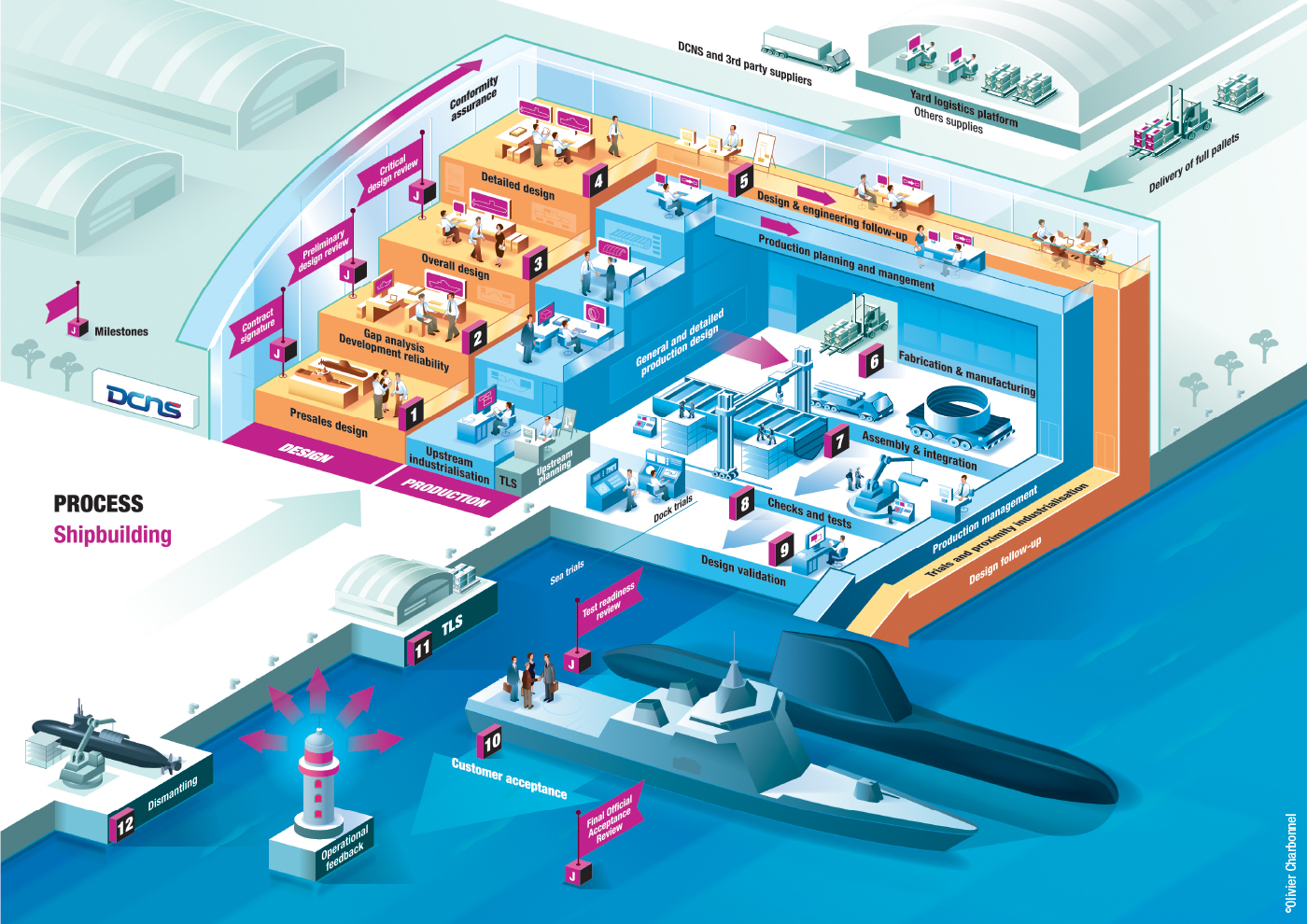 Once the vessel’s design passes through the various stages of the review cycle, procurement and fabrication begins at our yards in Cherbourg, Brest, Lorient, Nantes-Indret, Angoulême-Ruelle, Marseille, Toulon, Le Mourillon, Bagneux, Paris and Issy-Les-Moulineaux). The latest industrial planning and project management methodologies ensure smooth on-time delivery and installation of the subassemblies and units. This phase finished with the launch of the hull.

The next step is installing and integration all the ship’s equipment and systems. These include machinery, interior modules, functional systems like propulsion, power and HVAC, and operational systems such as command, combat and combat management systems. These systems are either developed directly by Naval Group or provided by 3rd party suppliers.

To prepare crews for the new ship, Naval Group offers theoretical and practical training programs and tools. From design to operation and maintenance, Naval Group supports navies in acquiring, maintaining and upgrading their know-how at our sites in Ruelle, Brest and Toulon.

Throughout the fabrication process, the vessel’s construction is tested for conformity to specifications. As the installations, modules and systems are fitted, they are tested during dock trials before undergoing extensive sea trials to evaluate seaworthiness and performance and test the shipboard equipment and systems in real world conditions. 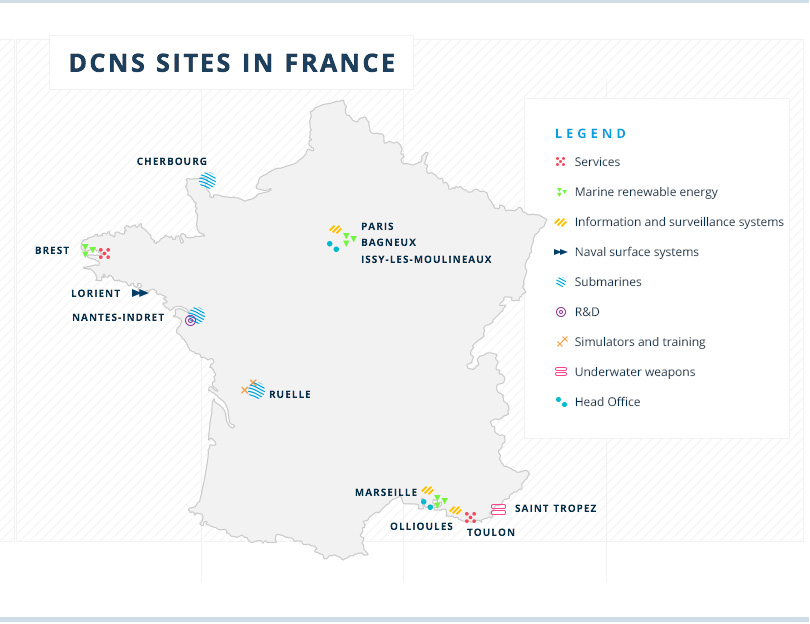 After passing Test Readiness Review, the vessel is officially handed over to the client and enters service.

During it service, the vessel is maintained and regularly modernized throughout its lifespan to provide optimum operational availability. Naval group provides several different maintenance contract modes to meet our client’s fleet availability strategy.

Naval Group is one of the few naval defence contractors that both builds ships and constructs shipbuilding facilities. Our services include the design and construction of shipyards and naval bases. Our technology transfer programs enable our clients to develop home-grown shipbuilding and fleet maintenance capabilities.

Driving a sea change in energy

What is the potential of marine renewable energies?

“The potential of MRE is as big as the world’s oceans are vast.”

We estimate annual tidal power production at 100 gigawatts and wind to be 30 times that, for example. OTEC is an interesting case. It uses the difference in temperature between warmer surface water and cooler deep water to generate electricity using a steam turbine. It works best in tropical regions where the temperature difference between deep and shallow ocean waters is the greatest. We estimate there to be around 100 countries in the world for which OTEC is an economically feasible source of renewable energy.

Also, many of the world’s most densely populated cities and countries are located on the coast. This proximity to the energy source has definite economic benefits because it reduces the cost of energy transportation. Also, it creates jobs locally, because it makes more economic sense to build the structures locally rather than overseas.”

Why did Naval Group decide to go into marine renewable energies?

“There is a natural fit between designing and building ships and marine renewable energy. For starters, there is the R&D and engineering, which requires deep knowledge of subjects like hydrodynamics, composite materials and corrosion resistance. To harness tidal energy, you have to know how to build big, highly efficient and robust turbines, which is basically the same thing as building propellers for nuclear submarines.

“There is a natural fit between designing and building ships and marine renewable energy.”

Then there is the sheer size of the structures. Our OpenHydro turbine is 26 meters high, the equivalent of a seven-story building. That’s where our shipbuilding experience comes into play. Naval Group has the knowledge and yards big enough to handle these huge structures. Also, customers want a turnkey solution that comes installed and connected to their power grid—just like a ship that has to fit into an existing fleet. And they want a partner who can maintain their MRE infrastructure over its lifespan, which is what we do with our vessel maintenance services. So you see the connection between our core business and MRE is real.”

Does MRE help your core business?

“We are getting better and faster at serial manufacturing, which is good for all our products.”

“That’s an interesting question. It turns out that it does. I can give you three examples. One is fatigue resistance. We have developed new software tools to simulate fatigue resistance for marine energy structures. We’ve begun using these tools to stress-test vessels. Another example is in material sciences. MRE is driving work in polymers and energy storage materials. This, we think, will have applications in our ships and submarines. Finally, to be cost effective, MRE structures need to be built in series. We are getting better and faster at serial manufacturing, which is good for all our products.”